Does my student need to attend an elite highly selective college to be successful? 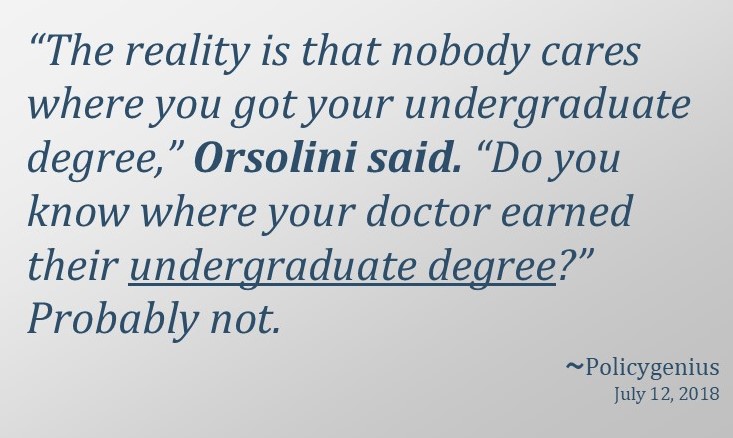 Many parents and students are under the impression that attending an elite highly selective college is a must in order to be successful. While I have my thoughts on this, I decided to put this “hypothesis” to the test.

To test this theory, I took a look at arguably the most visible symbol of a person’s success, their home. I compiled a list of the top real estate tax paying homes in Glen Ellyn (an affluent town in the western suburbs of Chicago).  These homes paid between $34k to $70K per year in real estate taxes. Using publicly available data, we were able to identify where 35 owners went to college and received their undergraduate degrees. The results were not what most folks would have expected.

Now graduate schools were a different story. If they attended, it was primarily an elite school, Harvard, University of Chicago, Northwestern, etc. This confirms my long-held philosophy of “get your undergraduate degree on the cheap at a solid school, put your money into grad school”.

Why pay attention to what I’m saying here?  I’ve been at this for nearly 20 years, which means I’ve been through the process more times than your neighbor, cousin, or sister-in-law. I work with families of all income levels, from $17K to $700k. I help 100+ families with the FAFSA every year. Many of these parents and students become tax clients. I do 500+ tax returns annually, so I see the long-term perspective of life post-college.

We’ve teamed up with SoFi to offer new & refinancing of student loans and mortgages.

The World Equity Group Form CRS can be found here.